Consider a scenario where you lose some of your important files from the computer due to accidental deletion or corruption. Data loss ain’t less than a nightmare for any computer user. If you have the valid backup, you can restore the files with ease. Taking regular backup is considered the best practice to protect computer data from being lost. But sometimes the situation may turn into a nightmare if you find the backup is itself corrupt. In this article, we’re going to discuss the most common reasons which can corrupt the backup file. Also, we’ll learn how to repair BKF file.

Data loss is inevitable, and you can’t deny this fact. It’s something certain to happen. Though you can avoid it in some cases, it can affect you miserably when happens. The best way to protect computer data from being lost is by taking regular backup. A data loss event takes place due to two main reasons: accidental deletion and corruption. Accidental deletion is a situation when you delete the files from the computer. If it’s a temporary deletion, you can restore it back from the Recycle Bin. But if it’s a permanent deletion, the files are gone for good. There’s no way to restore them back until unless you have a valid backup file or you can purchase a professional data recovery tool. Another reason for data loss is corruption which occurs due to various reasons. Due to corruption, files become inaccessible and there’s no way to open them anyhow.

Whenever you face a data loss situation due to any reason, you need something that can help you restore your data backup. Something that doesn’t cost you anything, but can provide you 100% satisfactory results. A valid backup plays the role of a lifesaver at the time of data loss. It contains the copies of your data which you back up by using a backup utility. And whenever a data loss situation takes place, you can restore files from backup with ease. Therefore, I strongly recommend taking backup regularly. You can use either NTBackup utility or a commercialware backup tool to take backup.

You can only restore files from backup if it’s valid. If there’s any sort of issue or error in the BKF file, restoration is just impossible until you repair it. Unluckily, there’s no manual trick to repair BKF file. You have to use a professional BKF Recovery tool in order to restore files from backup if it’s corrupt. But before that, let’s find out the common reasons for corruption:

A computer virus is very harmful to computer data. It can enter a computer and infect the files stored in it. A virus is highly capable to modify the file by adding junk content or deleting some part of the file. As a result, the file becomes inaccessible or corrupt.

Being a hardware device, a hard disk is highly prone to crash. If it fails or crashes down due to any reason, all the stored data become inaccessible or corrupt. If the BKF file is stored in the bad sectors of the hard disk, it’s likely to be corrupt.

If a computer system turns off suddenly due to power failure, it may put your data at high risk of loss. And if the sudden power failure takes place while you’re taking backup or restoring data from it, the BKF file is likely to be corrupt.

Catalog files play an important role in the backup. It stores all the information of the data which you back up. If any catalog file is missing from the backup due to any reason, the BKF file becomes inaccessible and you can’t restore anything from it.

CRC (cyclic redundancy check) is an error-detecting code used in the digital networks and storage devices. It detects the accidental changes to the RAW data. If there’s any sort of error or issue in the BKF file, the CRC fails and you can’t open or restore anything from the BKF file.

The aforementioned reasons are highly responsible for corruption in BKF file. And whenever you try to open a corrupt BKF file, you’re likely to encounter an error message like

The backup file is unusable

Here’s the list of the most common error messages:

Below is the list of most common error codes:

How to Repair BKF File?

Due to corruption, the BKF file becomes inaccessible. And when a BKF file becomes inaccessible, you can’t restore anything from it. Consequently, there’s no way to restore anything from corrupt BKF files until you repair them. If there are minor corruption issues, the NTBackup tool can fix them by itself. But in a case of severe corruption, you have to look forward to a professional solution like BKF Recovery tool. A professional recovery solution can help you repair BKF file which is corrupt due to various reasons.

SysInfoTools Backup Exec BKF Repair tool is one of the best solutions to repair BKF file. It supports BKF files created by NTBackup tool as well as VERITAS Backup Exec. Via this recovery tool, you can successfully restore files from backup as much as possible. You can restore the files in their original form without causing any alteration. If you’re a novice user, even then you can use this software to repair BKF file. It doesn’t require any prior technical expertise to use this software. So any technical or non-technical user can use this software with ease.

Backup Exec BKF Repair tool is available with the demo version for free evaluation. So before you can purchase this software, you must download the free demo version. By using the demo version, you can scan and repair BKF file. Also, you can check the preview of your data which you can actually recover from the corrupt BKF files. And if you’re satisfied with the results, then only you should purchase the software. 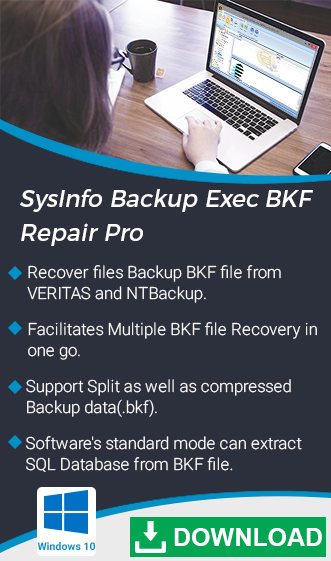