Facing a data loss situation is the worst moment that can make your life miserable. Whenever data loss happens, it brings you to tears. All your precious files and valuable data can vanish within a blink of an eye. Do you know why you face data loss situation? If you don’t, let me help you. In this article, we’ll discuss the most common causes of data loss a computer user should be aware of.

Data loss is an error condition in which the data is destroyed due to any reason. It can occur on any device that stores data, be it the computer hard disk or any removablae storage media.

Below are the top 5 causes of data loss: 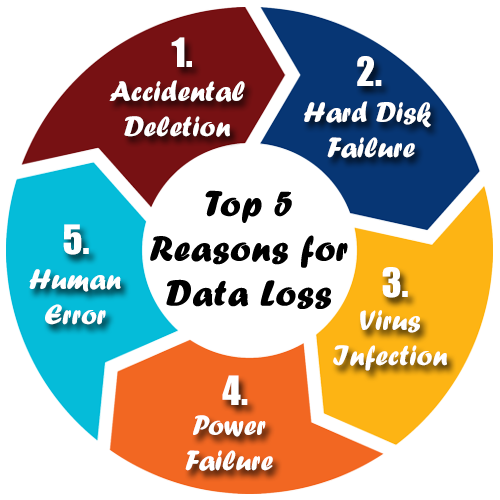 A hard disk is the most fragile part of a computer system. It may fail or crash down at any time due to various reasons. Generally, about 60% of hard disk failure occurs due to a mechanical failure. Being a mechanical device with moving parts, a hard disk drive is prone to crash or failure. Any sort of damage in the hardware is the primary reason for hard disk failure. Some other external factors include:

Most of the time, computer users lose their data due to virus infection. There are many types of computer viruses. And the seriousness of the infection simply depends on the type of virus. A computer virus is a type of malware (malicious software) that can spread from one system to another, and it has the ability to replicate itself. Generally, viruses make use of different ways to get access to your computer. They can easily destroy, steal or encrypt your data which may result in a data loss situation. Even sometimes they can completely corrupt the hardware of your computer. There are many viruses which may put your data at high risk.

Undoubtedly, a sudden power failure is really bad for your computer and its data. Some users have a misconception that unexpected power failure may pose a relatively low risk. But the reality is slightly different. Whenever a computer turns off suddenly due to unexpected power failure, it may cause a serious damage. Just keep in mind that operating systems are very complex, and hence you must follow the proper shut-down procedures in order to make sure that all the processes run smoothly and properly. A sudden power failure can surely interrupt these processes and lead to data loss situations.

Generally, human error is considered one of the leading causes of data loss. Sometimes users delete the system files which are critical to the proper functioning of the computer system. If the system files are missing, the computer fails to boot. Human error also includes a situation where you fail to update a software. The outdated software applications are often vulnerable to compromise. And just keep in mind that the cybercriminals just love the outdated operating system and applications connected to the Internet.

Generally, it’s said that data loss is as certain as death and taxes. It can happen at any time due to any reason. However, if you take a backup of your computer regularly, you have the fair chances of recovery at the time of data loss. For data that hasn’t been backed up earlier, a professional Data Recovery tool might be able to restore your lost data.